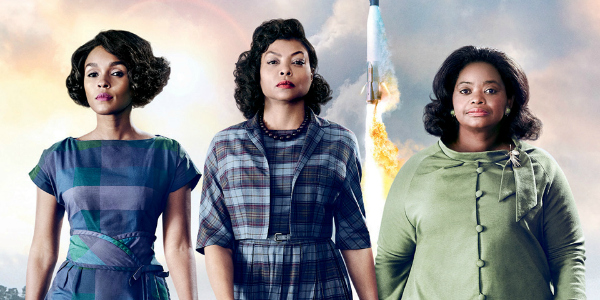 “We get to the peak together, or we don’t get there at all.” – Al Harrison, “Hidden Figures”

Based on the bestselling historical novel by Margot Lee Shetterly, Hidden Figures tells the powerful story of three brilliant African-American women who played major roles in sending American men and women into space.  Any film can be thought of as the sum of its parts, and in this case the equation reads “Stellar cast + Incredible True Story + Deep Layers of Truth = One Outstanding Film.”

The Cast – And Why I Love Them All

A genuine all-star cast does an incredibly beautiful job of bringing the moving story of this December 2016 release to life.  Katherine Johnson (Taraji P. Henson), Dorothy Vaughan (Octavia Spencer) and Mary Jackson (Janelle Monáe) feel like family as we watch their brilliance and dedication in the face of racial misunderstanding and daily persecution.  We find ourselves respecting Al Harrison (Kevin Costner) in spite of the way we would like to feel as this seasoned actor brings the inner conflict of this individual to the surface.  The cast is so good, in fact, that we even find ourselves loving the “bad guys” – Vivian Michael (played by Kirsten Dunst from Spiderman) and Paul Stafford (played by Jim Parsons from The Big Bang Theory).

Layers of Truth for Every Viewer

Most will walk into this movie expecting a tale of African-American women triumphing in the face of hardship, and Hidden Figures certainly delivers on this account.  As we examine the film more closely, however, multiple levels of meaning begin to emerge.  Here are just a handful of them:

1.)  Unity = Success – At first several characters in the film are at odds with each other.  Many of the Caucasian scientists at NASA are not thrilled about working alongside African-American co-workers.  Even among the African-American community there are many who don’t see quite eye to eye.  As the film progresses, however, it becomes painfully clear that learning to work in unity will largely determine the level of our success.

2.) Determination + Dreams = Payoff –  When we face hardship upon hardship, it is easy to be tempted to simply give up.  Several characters face this common battle… the NASA engineers fear they will never perfect the formula for a safe re-entry into Earth’s atmosphere, one woman fears she will never be allowed to take the classes she needs to become an engineer, and another woman fears she will never receive a much-deserved promotion due to the color of her skin.  The film teaches, however, that encouraging one another to keep dreaming and to throw ourselves into pursuing those dreams with all the determination we can muster will pay off in large and unexpected ways.

3.) People can Change –  Though mathematical principles may be constant, the human spirit is capable of great flexibility and change.  We find ourselves cheering as several film characters learn to think about problems from new angles in order to come up with creative solutions, and as they learn to think about one another in ways that defy their upbringing and preconceived notions.  We should never give up on our fellow humans.  No matter how hopeless it may seem, they are capable of growth!

Don’t Miss This One!

Hidden Figures has it all – a powerful message, deep life lessons, and quality performances.  To top the cake, the entire film is squeaky clean.  This isn’t just a film your family should consider seeing… your family needs to see this film!

Today’s post is part of the A-to-Z Challenge, where participants commit to posting one article for each day during the month of April – one for every letter of the alphabet.

Check back here at “The Artistic Christian” for a daily slice of art (art reviews, practical tips, and motivation for artists), all steeped in a rich Christian worldview.