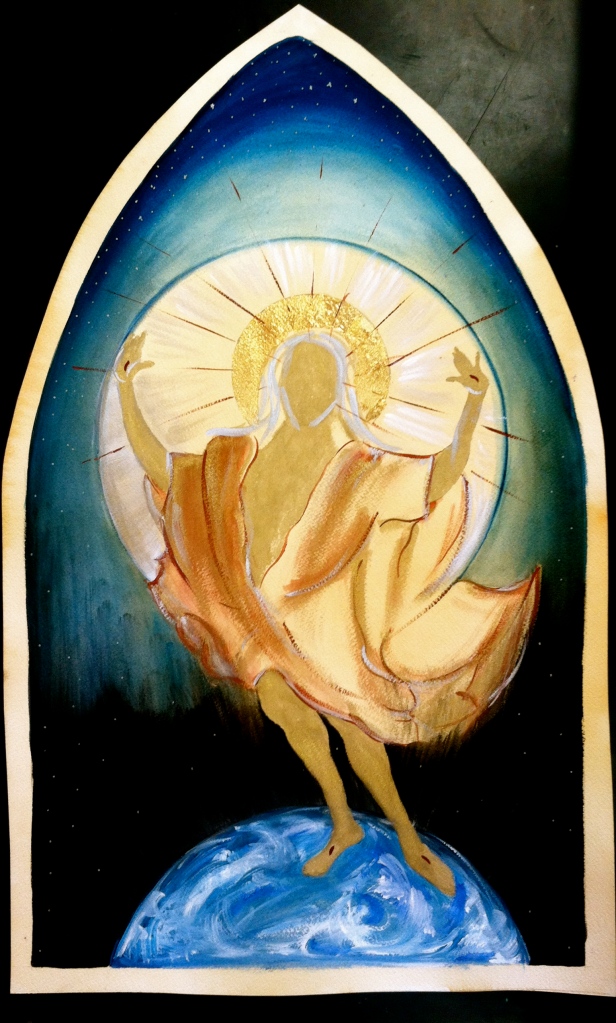 “I have wanted my work, be it my paintings, my writings, or my photography, to give back to the Master Creator of the Universe, honoring Him for all that He has afforded me.”

As a retired educator, Julie (affectionately known as “Mama Cookie” by her students), never considered herself to be an artist despite having taught high school art classes for 31 years. Instead, she always viewed herself as an educator first, and artist second. After retirement, however, Julie still felt that she had something to offer the world. The result was her blog, Cookie Crumbs: Life Through the Eyes of Cookie,” and the recent production of several beautiful paintings.

Julie grew up in the Eastern Orthodox Church, and though she has since started leaning toward her more catholic (collective Christian) roots, this early church influence has had a profound impact on her view of art.

“I have a deep respect for the Eastern Orthodox Church and a deep appreciation for Orthodox icons and the “writing” of those icons,” Julie explains, “as the Orthodox believe that icons are not painted graven images but are rather small open windows to the Divine. The Orthodox believe that icons are not paintings but are rather a visual representation of the written word – as an art teacher, I like that analogy very much.” 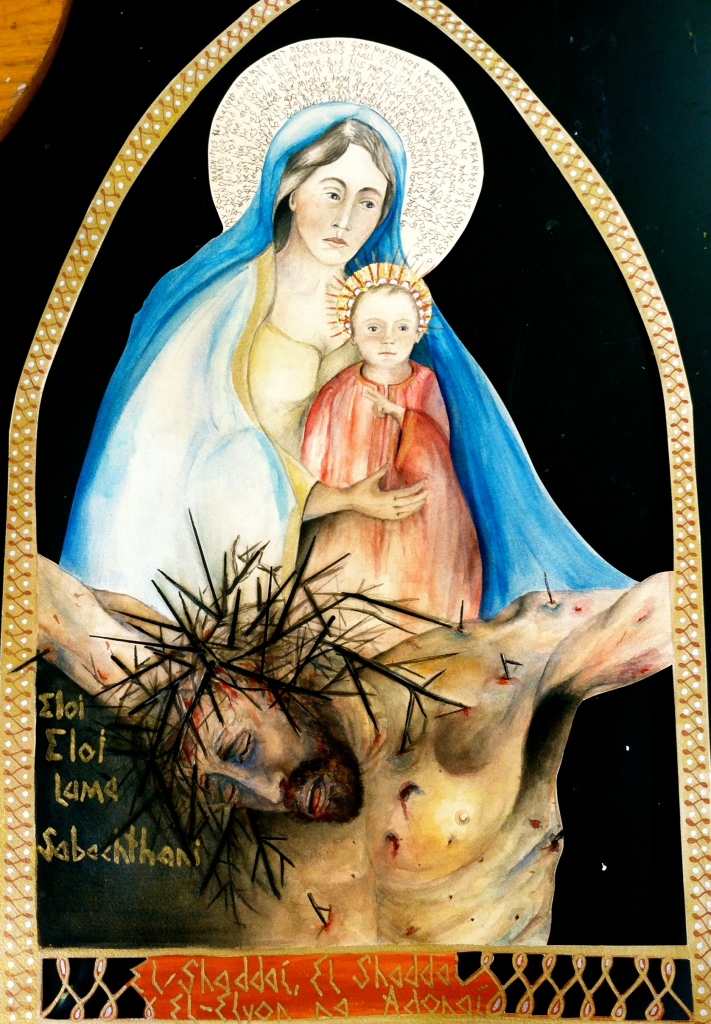 Julie’s faith has always played an important role in Julie’s life, including her teaching and artwork. “My belief and faith has always important to me and that did not waver or change in the classroom,” she shares. “Teachers are to mentor and mirror what it is to live in a moral society. My faith has always been my moral compass and I never hid that from my kids.

“Also I wanted to kids to know that being a Christian did not exempt one from the making of mistakes, poor choices and bad decisions but rather that to worship a loving Father who was forgiving yes, but who had set down parameters of living long ago and asked that His followers work at living within those parameters. I always wanted the kids to see and know that when there were bumps and blunders along the way, it was to the Loving Father we all must yield.

“As an art teacher I worked on pieces and projects that were often religious in nature, which I never hid from the kids. As an art teacher it is important that the kids get to see first-hand their teacher’s artistic work as well as the teacher’s own frustrations with the creative process and in turn the solutions which could lead to the success of a piece. It was important for the kids to see the entire process in real life and in real time.

“As my work often reflects my faith, I have always felt that I wanted to express that faith in a creative fashion. Like the great artists of the Renaissance, who beautifully depicted the Christian faith and who continue leaving me at a loss for words as I study their works, I too have wanted desperately to honor God through what I do. I have wanted my work, be it my paintings, my writings, or my photography, to give back to the Master Creator of the Universe, honoring Him for all that He has afforded me.” 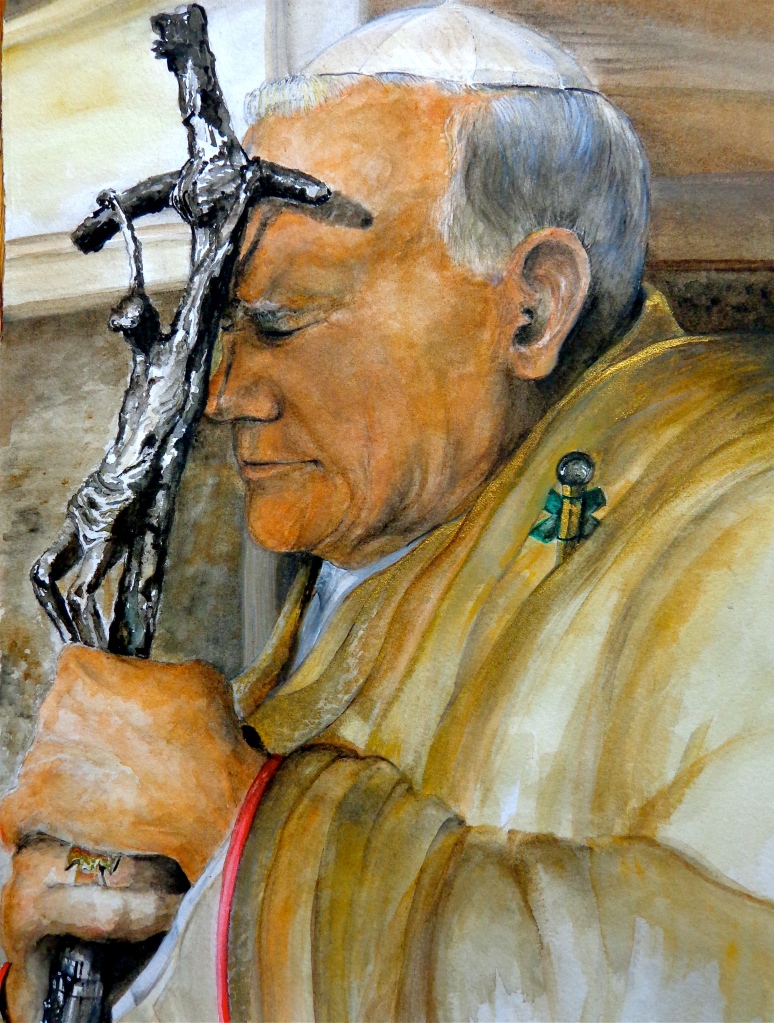 As far as her painting is concerned, Julie often draws inspiration from the Icons of the Eastern Orthodox Church as well as pieces from the Middle Ages and Celtic works. In recent years, however, she has turned her attention away from painting in order to focus on writing. “I have always wanted to write, and had I stayed in college any longer I most likely would have moved away from education over to journalism,” says Julie. “Written expression is very important to me, and I have been most thankful that I have had an opportunity to dabble with such in my blog.”

Julie’s blog is a direct result of her years spent as a public school teacher. She counseled so many students, fellow teachers, and administrators at her school that people began to refer to her as “Mama Cookie.” Now, instead of sharing her insights on life in the classroom or school hallway, Julie shares her reflections with her online audience.

Julie is saddened with how smitten our culture has become by empty things, such as the glamorous Hollywood lifestyle, and hopes that her work reflects something with true meaning and purpose. “People are moved by sounds, sights, images, and experiences,” Julie says. “It is my hope that I may produce such that is steeped only in the Truth.”

While Julie has produced many beautiful pieces of art over the years, she has never been interested in selling her art. “I have often been asked if people could purchase my paintings,” she explains. “I do have several large pieces on display in my husband’s business, but they are merely for enjoyment and reflection.”

After years of shaping the lives of students and friends, Julie is sure to have picked up a great deal of wisdom along the way. When asked what advice she would give to fellow Christian artists, here response was simple, yet profound: “Never allow society or culture to deter you from expressing your faith.”

“I am but the created, not the Creator.”