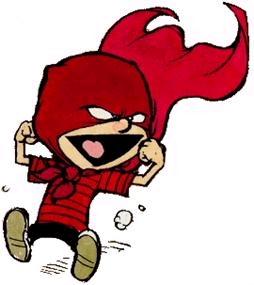 Apparently, my two-year-old son thinks he’s Superman. He throws his blankie around his neck, thrusts his fists in front of him, and races around the house making a WHHOOSSHH sound (which is what it sounds like when you fly, obviously).

It was super cute… until he decided that he could “fly” out of his baby bed in a single bound! Now it’s not uncommon for us to hear a loud THUMP in the night as he leaps out of his bed to play with his toys. By the next morning, he’s managed to climb back into the stupid thing (with a whole armful of toys, no less!). Fortunately for Mommy and me, that magical invention called a “toddler gate” is still a Kryptonite too powerful for Little Man, but he’s definitely working on it!

Watching him do all of this reminds me of my favorite cartoon character of all time – Calvin, from Bill Watterson’s Calvin and Hobbes. Just like any other typical boy, Calvin imagines himself to be a super hero (Stupendous Man). And, when in costume, he’s absolutely convinced that he’s invincible.

Where do our boys get this idea? What made my own Little Man decide that he was Superman? I’m afraid all fingers are pointing to Daddy on this one… I’ll take full blame for this one!

You see, it wasn’t Mommy who helped Little Man “fly” out of the bathtub and soar around the bathroom, wear his bath towel like a superman cape, or jet around the house while Daddy sings the Superman theme song at the top of his lungs. Nope… this is all Daddy’s fault.

But if you think about it, it’s a pretty cool thing. My son absolutely trusts that I’m strong enough to pick him up and help him fly across the room… he has absolutely no fear as we play Superman together. Even when I pretend to let him fall, he simply laughs and shrieks, “More… More!”

And because of his absolute trust in my ability to keep him safe, he has become more confident on his own. Even enough to hurl himself out of his baby bed and make the dangerous climb back up those slippery rails in the pitch blackness!

Isn’t this just like our relationship with God? The longer we allow the LORD to carry us through life, the more we come to depend on His perfect strength and ability to catch us when we fall. The words of the Psalmist become more and more real to us:

“The LORD is my strength and my shield; in Him my heart trusts.”

If God is the one holding us afloat, what is there to fear? But do we really have the faith of a little child – daring to risk for the cause of Christ and laughing in the face of danger, trusting our Heavenly Father to catch us? Or are we too afraid to take the first step?

Maybe we can learn a thing or two from Stupendous Man!

5 thoughts on “The Stupendous Adventures of Super Baby!”