This week’s Flash! Friday challenge was to concoct a story that involved a royal wedding, was based on the historical painting below, and stayed within the 140-160 word limit.

I hope you’re all having a fabulous Friday, and here is the entry I came up with! 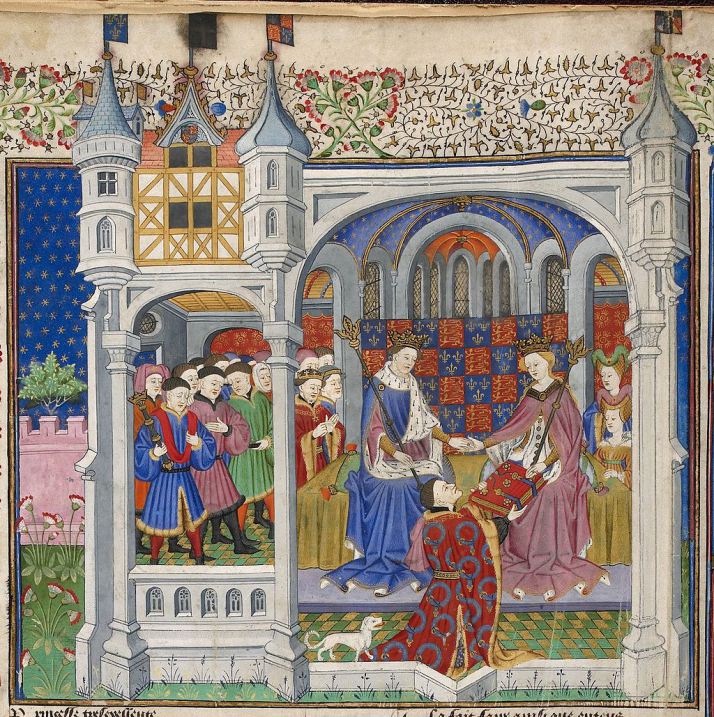 John Talbot’s presentation of the Book of Shrewsbury to Queen Margaret of Anjou ca 1445 AD. Public Domain, courtesy of the British Library Royal.

The message stood in place of the Royal Oath, penned in colorful calligraphy.

Margaret caught her breath. She had been queen for five minutes, and already she had enemies?

Sutton, the court priest, stooped in a reverent bow, but his eyes had narrowed into hateful little slits.

“How much does he know?” Margaret wondered. That she was an imposter? That she had viciously murdered the actual Lady of Anjou? That she had slipped into this time stream only months ago? That the king adored her mainly because she knew the future?

A sudden memory brought a thin smile to her lips. Her eyes twinkled as she took the heavy book from the priest’s brittle fingers.

If she remembered her history, John Sutton would be executed in the Year of Our Lord, 1445.

And now she understood why.

Margaret’s smile turned his blood to ice. “Oh, I intend to.”

The Bible is filled with warnings, but instead of the secretive, “one-eye-closed” type of political dealings we find in this week’s short story, God’s warnings are not hidden at all.  Instead, He makes His warnings plain enough for all the world to see.

Take, for example, this clear warning that Jesus provided while here on earth:

“The Son of Man will send out his angels, and they will weed out of his kingdom everything that causes sin and all who do evil. They will throw them into the blazing furnace, where there will be weeping and gnashing of teeth.”

It doesn’t get much plainer than that!  But in case someone missed this verbal warning, the Bible tells us that God has literally written His warning in the sky:

“For ever since the world was created, people have seen the earth and sky. Through everything God made, they can clearly see his invisible qualities–his eternal power and divine nature. So they have no excuse for not knowing God.”

God’s warnings are clear and outright, and so is His solution.  The answer lies in His Son!  (John 3:16)

Are we depending on our friends and neighbors to decipher our “hidden warnings” about God’s wrath, or are we spelling it out for them as plainly as Jesus did?