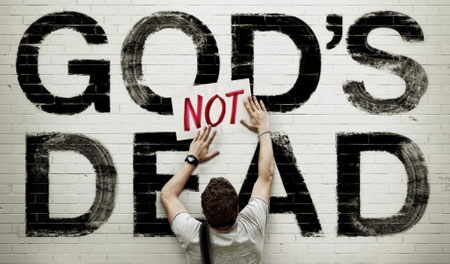 If you were going to support just one film by watching it in theatres this year, this is the one you would need to see.

God’s Not Dead, the Christian film recently released this March, accomplishes what every Christian work attempts to do: it provides a high-quality, entertaining experience while simultaneously proclaiming the powerful truths of God’s Word.

Kevin Sorbo (of Hercules fame), Shane Harper (Good Luck Charlie, High School Musical 2), David A.R. White (Revelation Road, Jerusalem Countdown), and Dean Cain (Lois & Clark: The New Adventures of Superman) each deliver stunning performances. The guest cameos by the Newsboys and Duck Dynasty’s Willie and Korie Robertson aren’t quite so hot, but hey, no one ever said these people claimed to be great actors! Throughout the film it is extremely evident, however, Who is kept on center stage. Every moment of this well-written plot draws our attention to God, Who is very much alive and very much at work.

According to I Thessalonians 1:9, we serve a Living and True God, and that is the message this film drives home. From the college student who dares to defend God in a college lecture hall, to young Muslim and Chinese students who discover the One True God and risk losing everything, to the pastor of a small ministry who has begun to wonder if God is still working in his life, each powerfully depicted story line will touch your heartstrings and leave you feeling inspired.

But don’t be fooled – this is not a “feel-good” movie. Just before the ending credits, viewers are slapped in the face with the hundreds of court cases that are pending right now involving colleges and universities attempting to silence the voice of Christian students. The world has risen up to declare that the God of Christianity is dead. As Christians, we can stand silent and allow this message to spread like a virus among today’s youth, or we can rally together and cry out for the Truth.

God is certainly not dead – and it’s time we begin to act like it!

9 thoughts on “Putting God on Center Stage: Film Review for “God’s Not Dead””